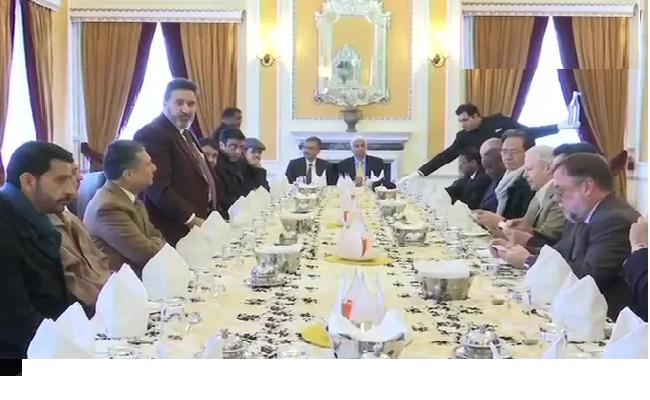 Foreign delegates' visit to Jammu and Kashmir: Besides US, the team comprises envoys from 14 other countries

Envoys from 15 nations -- including the US -- are in Jammu and Kashmir for a two-day visit to check on the ground situation in the newly created union territory. This is the second time a foreign delegation is visiting Jammu and Kashmir since the Centre scrapped the special status of the state under Article 370 of the constitution and bifurcated it into two union territories.
Like last time, this time's itinerary includes visits to Srinagar and Jammu, interaction with locals and briefings from the army. What's new is a meeting with a small group of political leaders led by former minister Altaf Bukhari, who is seen as the face of new political regrouping in the state.

The former leader of Mehbooba Mufti's People's Democratic Party is among a handful of political leaders in Jammu and Kashmir who are not under detention. "It will be a free and frank discussion. Whatever is on the ground we will discuss," Mr Bukhari - who met the Governor last week with a memorandum --told NDTV.
Besides US, the team comprises envoys from South Korea, Morocco, Niger, Nigeria, Guyana, Argentina, Norway, Philippines, Maldives, Togo, Fiji, Peru, Bangladesh and Vietnam
The European Union was also on the list, but sources said the envoys had declined, saying they did not want a "guided tour".
They wished to meet the three detained former Chief Ministers and would visit at a later date, sources said.
Government sources told NDTV that envoys of the European Union have welcomed the idea of a trip to Jammu and Kashmir, but many of them said it was short notice this time and they look forward to going at a later date.
"The purpose of the visit was to display measures taken by the government to bring normalcy. There will be more diverse interactions with such groups visiting in Jammu and Kashmir with progressive normalisation of the situation," the foreign ministry said.
The restrictions in Jammu and Kashmir have been continuing since August, when the government had announced its big move. The government had called them preventive measures against any backlash. While many of the restrictions have been eased, the confinement of Kashmir's political leaders and the ban on internet have raised concerns abroad. Several nations and the US House of Representatives have referred to the matter.
The PDP -- party of detained former Chief Minister Mehbooba Mufti -- said the invitation to foreign diplomats was the government's way of normalising the situation. "Today that @PMOIndia lets a 2nd batch of envoys to "see" the situation in #Kashmir, it only seems like an attempt to normalize the Govts own clampdown. The dare is on @PMOIndia will they ever let these Foreign Envoys meet political detainees who are jailed since 160 days now," their tweet read.
The National Conference was scathing in its criticism. "In a repeat of the visit of the European Members of Parliament, the envoys have been brought here on a guided tour, where access has been severely limited to those handpicked individuals who will toe the government line," the party said in a statement.
The Congress too, has attacked the government, accusing it of double standards. "We demand that the government allows unfettered access to J&K to all politicians and not resort to guided tours for envoys," senior Congress leader Jairam Ramesh told reporters.
(Courtesy: NDTV)