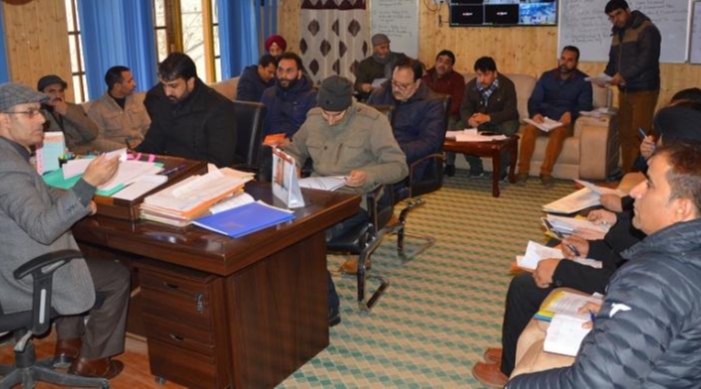 On the occasion, a threadbare discussion with regard to various environmental issues was held wherein it was informed that Peoples Biodiversity Register (PBR) containing complete information on
cultivated/domesticated plant and animal diversity and wild biodiversity has been prepared at different levels. It may be recalled that the Committees have been constituted in each rural as well as urban local bodies so that different strategies with regard to the elimination of single use plastic could be formulated.

Speaking on the occasion, the DC stressed upon the concerned officers to play a proactive role towards the elimination of plastic hazard in the district. He urged upon the people to avoid the use of plastic items besides describing various ill effects of plastic use. DC said that all government offices, hospitals and schools shall be declared as no plastic zones wherein strict prohibition on the use of plastic items shall be imposed. Moreover, he said that all tent house owners and other concerned stakeholders who are providing disposable items during functions, shall be appropriately compensated with alternative bio-digredable items.

Meanwhile, Divisional Forest Officer, JV, Division Baramulla Parveez Ahmad informed the meeting that he has declared his office as no plastic zone wherein single use plastic shall not be used by the officials and other visiting persons.