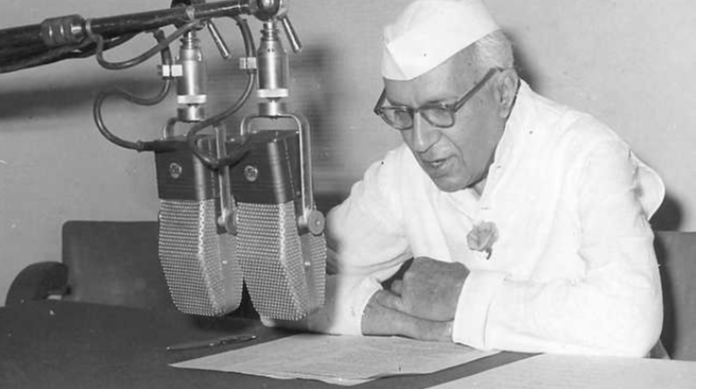 I want to speak to you tonight about Kashmir, not about the beauty of that famous valley, but about the horror which it has had to face recently. We have passed through very critical days and the burden of taking vital and far-reaching decisions has fallen upon us. We have taken those decisions and I want to tell you about them.

The neighbouring Government, using language which is not the language of Governments or even of responsible people, has accused the Government of India of fraud in regard to the accession of Kashmir to the Indian Union. I cannot emulate that language nor have I any desire to do so, for I speak for a responsible Government and a responsible people. I agree that there has been fraud and violence in Kashmir but the question is: Who is responsible for it? Already considerable parts of the Jammu and Kashmir State have been overrun by raiders from outside, well-armed and well-equipped, and they have sacked and looted the towns and villages and put many of the inhabitants to the sword. Frightfulness suddenly descended upon this lovely and peaceful country’ and the beautiful city of Srinagar was on the verge of destruction.

I want to say at once that every step that we have taken in regard to Kashmir has been taken after the fullest thought and consideration of the consequences and I am convinced that what we have done was the right thing. Not to have taken those steps would have been a betrayal of a trust and cowardly submission to the law of the sword with its accompaniment of arson, rape and slaughter.

For some weeks past we had received reports of infiltration of raiding bands into the State territory of Jammu province, and also of a concentration of armed men near the border of Kashmir with the North-West Frontier Province. We were naturally concerned about this not only because of our close ties with Kashmir and her people but also because Kashmir is a frontier territory adjoining great nations and therefore we were bound to take an interest in the developments there. But we were anxious not to interfere and we took no step whatever to intervene even though a part of the Jammu province was overrun by these raiders.

It has been stated that there were raids from the Jammu side across the Pakistan border and that there was communal trouble in Jammu, and Muslims were killed and driven away. In the past we have not hesitated to condemn evil whoever might have committed it, whether Hindus or Sikhs or Muslims and so if Hindus or Sikhs or any functionaries of the State misbehaved in the Jammu province, certainly we condemn them and regret their deeds.

But I have before me a detailed list of 95 villages in the Jammu province which have been destroyed by the raiders from Pakistan. Bhimbar, a considerable town, had also been sacked and destroyed. Other towns are besieged and a considerable part of Poonch and Mirpur areas is in the possession of the raiders. Does this indicate that aggression took place from the Kashmir side upon West Punjab or does it not show that there has been continuous organized aggression from West Punjab against the Kashmir State? These raiders possess the latest type of modern arms. It is reported that they have used flame-throwers, and a disabled tank has been discovered with them.

About this time we were asked by the Kashmir State to provide them with arms. We took no urgent steps about it and although sanction was given by our States and Defence Ministries, actually no arms were sent.

On the night of the 24th October, I learnt of another raid, this time from the Abbottabad-Mansara Road which enters Kashmir near Muzzafarabad. We were told that armed and well-equipped persons in over one hundred lorries had broken in, had sacked Muzzafarabad and killed many persons there, including the District Magistrate, and were proceeding along the Jhelum Valley road towards Srinagar. The State forces were spread out in small number* all over the State and they could not stop this armed and well-organized raid. The civil population, Hindu and Muslim, fled before the raiders.

It was on the night of the 24th that for the first time a request was made to us on behalf of the Kashmir State for accession and military help. On the morning of the 25th, we considered this in the Defence Committee but no decision was taken about sending troops in view of the obvious difficulties of the undertaking. On the morning of the 26th we again considered this matter. The situation was even more critical then. The raiders had sacked several towns and had destroyed the great powerhouse at Mahoba which supplies electricity to the whole of Kashmir. They were on the point of entering the Valley. The fate of Srinagar and the whole of Kashmir hung in the balance.

We received urgent messages for aid not only from the Maharaja’s Government but from representatives of the people, notably that great leader of Kashmir, Sheikh Mohammed Abdullah, the President of the National Conference. Both the Kashmir Government and the National Conference pressed us to accept the accession of Kashmir to die Indian Union. We decided to accept this accession and to send troops by air, but we made a condition that the accession would have to be considered by the people of Kashmir later when peace and order were established. We were anxious not to finalise anything in a moment of crisis and without die fullest opportunity being given to the people of Kashmir to have their say. It was for them ultimately to decide.

And here let me make clear that it has been our policy all along that where there is a dispute about the accession of a State to either Dominion, die decision must be made by the people of that State. It was in accordance with this policy that we added a proviso to the Instrument of Accession of Kashmir.

We decided to send troops in the afternoon of the 26th October. Srinagar was in peril and the situation was urgent and critical. Our staff worked hard day and night and at daybreak on die 27th our troops went by air. They were small in numbers to begin with but immediately on arrival they rushed into action to stop the invader. Their gallant commander, a brave officer of our Army, was killed the next day.

Since then troops and equipment have been flown over daily, and I should like to express my high appreciation and the appreciation of my Government for the fine work which our staff have done, as well as the pilots and the aircrews who have thrown themselves into this adventure heart and soul. The airlines have co-operated with us fully and to them also I am grateful. Our young men have shown how they can rise to the occasion in a moment of crisis to serve their country.

Srinagar was in peril and the invader was almost on its doorstep. There was no administration left there, no troops, no police. Light and power had failed and there were a vast number of refugees there and yet Srinagar functioned without obvious panic and the shops were opened and people went about the streets. To what was this miracle due? Sheikh Abdullah and his colleagues of the National Conference and their unarmed volunteers, Muslim and Hindu and Sikh, took charge of the situation, kept order and prevented a panic. It was a wonderful piece of work that they did at a moment when the nerves of most people might have failed them. They did so because of the strength of their organization, but even more so, because they were determined to protect their country from the ruthless invader who was destroying their country and trying to compel them by terrorism to join Pakistan. Whatever the future may hold, the people of the Valley of Kashmir have exhibited during these past few days remarkable courage, capacity for organization and unity.

It would be well if this lesson were understood by the whole of India which has been poisoned by communal strife. Under the inspiration of a great leader, Sheikh Abdullah, the people of the Valley, Muslim and Hindu and Sikh, were brought together for die defence of their common country against the invader. Our troops could have done little without this popular support and co-operation.

The Maharaja of Kashmir deserves to be congratulated on his decision to make Sheikh Abdullah the head of the administration at this critical juncture. That was a wise step which other Rulers might well follow, making their people trustees and defenders of freedom.

We have passed through days of peril not only for Kashmir but for the whole of India. That peril is less now but it is by no means over and many other dangers confront us. We have to be very vigilant and well prepared for whatever may happen. The first step in this preparation is to put an end completely to every manner of communal strife in India and to stand up as a united nation to face every danger which might threaten our freedom. External danger can only be faced effectively when there is internal peace and order and an organized nation.

We talk about the invaders and raiders in Kashmir and yet these men are fully armed and well-trained and have competent leadership. All of these have come across from Pakistan territory. We have a right to ask the Pakistan Government how and why these people could come across the Frontier Province of West Punjab and how they have been armed so effectively. Is this not a violation of international law and an unfriendly act towards a neighbouring country? Is the Pakistan Government too weak to prevent armies marching across its territory to invade another country or is it willing that this should happen? There is no other alternative.

We have asked the Pakistan Government repeatedly to stop these raiders from coming and to withdraw those who have come. It should be easy for them to stop them, for the roads into Kashmir are very few and have to past over bridges. We on our part have no intention of using our troops in Kashmir when the danger of invasion is passed.

We have declared that the fate of Kashmir is ultimately to be decided by the people. That pledge we have given and the Maharaja has supported it, not only to the people of Kashmir but to the world. We will not and cannot back out of it. We are prepared when peace and law and order have been established to have a referendum held under international auspices like the United Nations. We want it to be a fair and just reference to the people and we shall accept their verdict. I can imagine no fairer and juster offer.

Meanwhile, we have given our word to the people of Kashmir to protect them against the invader and we shall keep our pledge.

(The speech was excerpted from Jawaharlal Nehru’s Speeches (Volume one) from September 1946-May 1949); published by Ministry of Information and Broadcasting, Government of India. This speech was broadcast from All India Radio on November 2, 1947.)