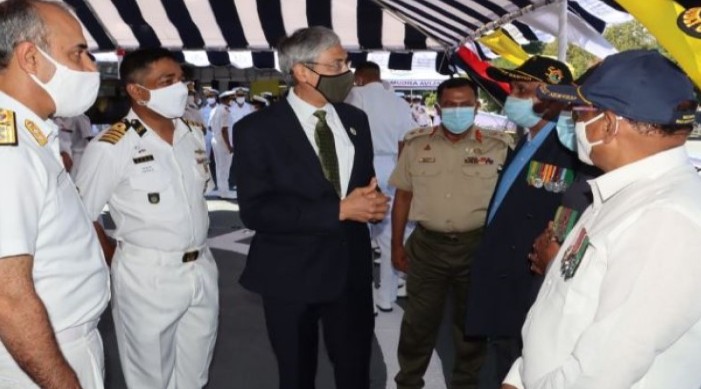 Muhammad Imran, High Commissioner of Bangladesh to India with the Indian war veterans at BNS Somudra Avijan at Visakhapatnam

Bangladesh has honoured 10 Indian naval war veterans for their contribution to the 1971 Liberation war.

As part of Birth Centenary celebrations of the Father of the Nation, Bangabandhu Sheikh Mujibur Rahman, Muhammad Imran, High Commissioner of Bangladesh honoured the Indian war veterans at a function hosted onboard BNS Somudra Avijan at Visakhapatnam on Tuesday, said a Ministry of Defence statement.

Rear Adm Tarun Sobti, VSM, Flag Officer Commanding Eastern Fleet was the Chief Guest for the event which was attended by Rear Adm Jyotin Raina, NM, VSM CSO (Ops) and other senior officers of the ENC, it added.

Bangladesh and India are marking this year as the Golden Jubilee of Bangladesh’s Freedom in 1971. They are also celebrating the 50 years of establishment of their diplomatic relations. Bangladesh is also commemorating the Birth Centenary of Bangabandhu Sheikh Mujibur Rahman this year.

This year for the first time a contingent from the Bangladesh Army had marched in India’s Republic Day parade on January 26.

In March this year, Indian Naval ships- Sumedha and Kulish, had made a port call at the historic port city of Mongla in Bangladesh for the first time aimed at paying homage to the Bangladeshi and Indian combatants and citizens who laid down their lives during the 1971 war.

In April, an Indian Army contingent had participated in 'Exercise Shantir Ogroshena 2021' conducted by Bangladesh to commemorate the birth centenary of Bangladesh’s ‘Father of the nation’ Sheikh Mujibur Rahman.