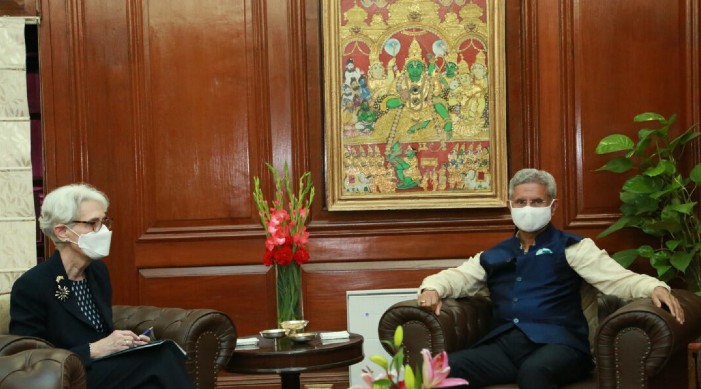 The visiting US Deputy Secretary of State Wendy Sherman on Wednesday met External Affairs Minister S Jaishankar in New Delhi and held discussion on regional developments, including in Afghanistan, Myanmar and China, a statement issued by US embassy Spokesperson Ned Price on Thursday said.

During the meeting, the two sides also discussed implementing outcomes from the recent bilateral meeting between US President Joe Biden and Prime Minister Narendra Modi and the recent Quad Leaders’ Summit, the US embassy Spokesperson added.

According to Ned Price, Deputy Secretary Sherman underscored the importance of continued close cooperation between the US and India on global issues.

Earlier, the US Deputy Secretary of State had a substantive and in-depth meeting with Foreign Secretary Harsh Vardhan Shringla.

The Deputy Secretary and Foreign Secretary discussed the growing security, economic, and Indo-Pacific convergence between India and the US, including around ending the COVID-19 pandemic, combating the climate crisis and accelerating clean energy deployment, deepening trade and investment ties, and expanding cooperation on cybersecurity and emerging technologies, the US embassy Spokesperson said.

Deputy Secretary Sherman expressed the US’ gratitude for Prime Minister Modi’s announcement that India, which is the world’s largest vaccine producer, would soon resume exports of COVID-19 vaccines, the Spokesperson said.

During their talks, the US Deputy Secretary and the Indian Foreign Secretary also reviewed pressing regional and global security issues, including Afghanistan, Iran, Russia and China.

The two sides also discussed ongoing efforts to return Myanmar to a path to democracy.

According to the statement, Deputy Secretary Sherman assured Foreign Secretary Shringla of the US’ ongoing commitment to India’s national security.

The two sides expressed their mutual commitment to upholding democracy and human rights and agreed on the importance of continued close cooperation on shared global challenges.