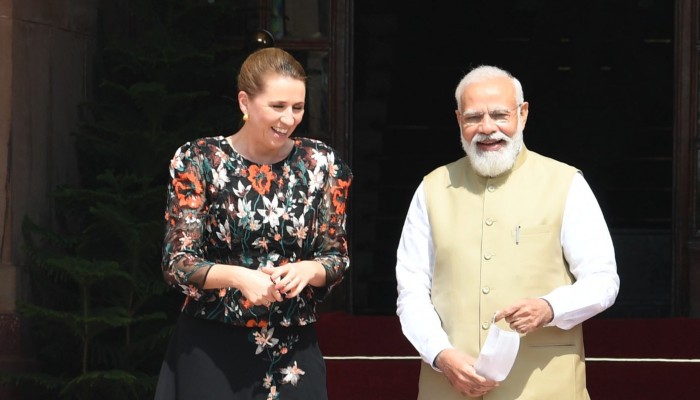 The Danish PM concluded her visit to India, which was the first by a head of government in the post Covid-19 pandemic phase

Besides signing four agreements, India and Denmark decided to strengthen their bilateral cooperation in the areas of agriculture technology, including in the sectors of food safety, cold chain, food processing, fertilizers, fisheries and aquaculture.

Such developments took place during the just concluded three-day (October 9-11) visit of Danish Prime Minister Mette Frederiksen, which was the first visit by a head of government to India following the Covid-19 pandemic, the Ministry of External Affairs said in a statement on Tuesday.

The Ministry added that bilateral talks between the two Prime Ministers were held in a warm and friendly atmosphere demonstrating the close partnership between the two countries.

Both sides reviewed the progress in the Green Strategic Partnership which was established during the Virtual Summit held in September 2020.

During the visit, new areas of cooperation like smart water resource management, waste to best- creation of best resources from waste, and efficient supply chain management were also identified. Both sides welcomed the cooperation in the field of health.

Both leaders expressed appreciation of the on-going partnerships in green technologies and sustainable solutions in sectors like renewable energy, including wind and solar, water, shipping and ports, infrastructure and circular economy.

The two Prime Ministers also discussed regional and global developments, including the post-pandemic global economic recovery, Indo-Pacific and the situation in Afghanistan.

The two leaders welcomed the decision to resume the India-EU FTA negotiations and expressed the hope that they will be concluded at an early date.

Four government-to-government MoUs and agreements in the fields of traditional knowledge, skill development, mapping of ground water resources and coolant technologies were exchanged during the visit.

Apart from these, three commercial agreements were also concluded on the sidelines of the visit.

According to the MEA, Danish PM Frederiksen extended an invitation to PM Modi to visit Copenhagen for the second India-Nordic summit in 2022.

President Kovind extended an invitation to Queen Margrethe II of Denmark to visit India next year.

During her visit to India, PM Frederiksen visited Agra and the Garvi Gujarat Bhavan where she got a glimpse of the rich cultural heritage of India.

She gave a special address at an event organized by the Observer Research Foundation on the Green Strategic Partnership and on the importance of close collaboration to combat climate change.

She also interacted with girl students at Kendriya Vidyalaya in New Delhi where she had an opportunity to see the Atal Innovation Lab.