Is Pakistan sliding into dark period of internal instability? 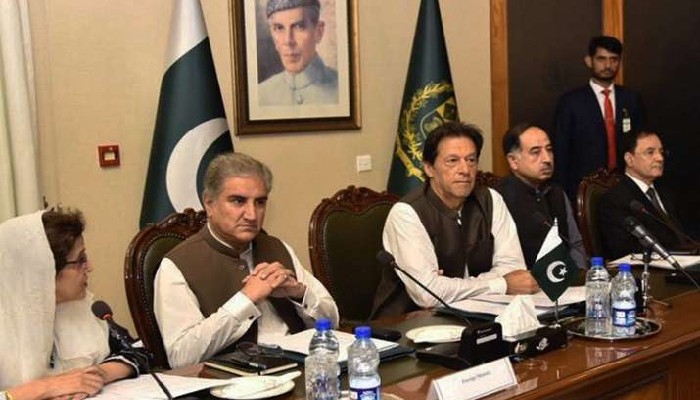 With the Imran Khan government surrendering to the dictates of fundamentalists and radicals, Pakistan is heading for deep crisis

With the Imran Khan government surrendering to the dictates of fundamentalists and radicals, Pakistan is heading for deep crisis

The Tehreek-i-Labbaik Pakistan marched towards Islamabad for the seventh time, causing panic within the government. Pakistan’s Interior Minister, Sheikh Rashid, who, a few days ago, had announced the signing of an agreement with the TLP, subsequently requisitioned the Rangers to control the rampaging TLP.

Requesting the TLP to reign in its protests, Sheikh Rashid stated, “Why don't you believe us when we say that the French envoy has left the country.”

What he failed to mention was that France had not announced its new envoy to the country due to internal strife within Pakistan, post the completion of tenure of the previous incumbent.

Pakistan’s fears are stemmed by the fact that the TLP possesses machine guns and can be a major threat.

Talks were held between the government, including prominent clerics, and the TLP. In a press conference Pakistan officials stated an agreement had been reached, details of which would be shared later, implying surrender to a religious organization’s dictates.

The government fears revealing details of the peace deal as these would be exploited by the opposition. The situation may have been diffused for the moment, but this is not the end.

As resident editor of Islamabad-based Dawn newspaper, Fahd Hussain wrote recently, “Every time the TLP crowds have descended on the federal capital, they have lugged with them far more political baggage than they could carry. Each time, the government of the day has surrendered after putting up meek resistance, and every time the TLP has gone back after being emboldened by the state’s meekness.”

This was the same group which forced Prime Minister Shahid Khaqan Abbasi-led government in Pakistan in 2017 to back down and ended its protest only when the ISI signed the agreement as the guarantor.

Videos had emerged of a senior army officer distributing money to protestors to enable them to return home. This protest boosted the election campaign of Imran. When the TLP protested in April this year, the current government signed an agreement to end the protest but jailed their leader.

They failed to honour all terms of the agreement. Past instances indicate that the TLP is backed by the Pakistan army and exploited to pressurize elected governments.

The current government banned the TLP but permitted them to fight elections, logic for which was never given. Many in Pakistan claim that the TLP is sponsored by RAW.

The group seeks to create an independent state along Pakistan’s western borders and impose Sharia Laws. During the recent visit to Kabul, then ISI Chief Faiz Hameed requested the Taliban government to stop the TTP from operating from Afghanistan.

In response to Pakistan’s demand, in a series of attacks, eight Pakistani soldiers were killed by the TTP, the terrorist group which has maintained close links with the Taliban and the Haqqani network and hence enjoying their support.

The Baloch are gaining in confidence. There are reports that their militant groups are now conducting large-scale recruitment in Baluchistan and increasing their attacks. Their targeting of the CPEC (China-Pakistan Economic Corridor) has led to the Chinese government demanding additional security. Gwadar is possibly being dumped in favour of Karachi. Many CPEC projects are stalled.

Till the Taliban took over Kabul, Pakistan blamed India for supporting the TTP and the Baloch. Pakistan Foreign Minister Shah Mahmood Qureshi stated that Indian consulates in Afghanistan were providing arms and financial support to these groups.

In an interview with Afghanistan’s Tolo News, the Pakistan Foreign Minister said, “We feel that their (Indian) presence is perhaps larger than it ought to be (in Afghanistan) because they...don’t share a border with you.”

When questioned further he stated that India was, “carrying out terrorist activities in Pakistan (using Afghan soil).” Now with zero Indian presence, Pakistan has no one to blame. It cannot blame the Taliban which it itself imposed in Kabul, for which it is paying the price as the global community refuses to recognize it.

Whenever Pakistan fails to control an internal situation, it blames Indian RAW for being behind it. Supporting terrorism and exploiting religious fundamentalism for political gains has been the bane of Pakistan. The TTP was born from the ashes of the flawed attack by Musharraf on the Lal Masjid which claimed over a 100 Pashtun lives in 2007.

Since then, Pakistan never repeated the mistake and treated the clergy of the Lal Masjid with reverence. General Zia-ul-Haq sought to Islamize Pakistan for his own political ends. Subsequent governments exploited it for their benefits. The military-Mullah nexus is now deep rooted within Pakistan. This nexus is evident whenever a religious party decides to protest in Islamabad, the TLP is included.

In addition to these security problems is growing internal anger due to rising inflation. Pakistan currently has the highest inflation rate in South Asia and low foreign exchange reserves despite an infusion by Saudi Arabia.

The Medina state which Imran promised, as part of his election manifesto, is beyond a dream today. Pakistan is amongst the countries with the highest foreign debt. The Pakistan Economic Advisors Wing of the Ministry of Finance stated in its report of last week, “The effect of these impulses — surge in international oil prices, exchange rate depreciation and adjustments in administered prices — may intensify the magnitude of prices and transportation cost.”

The opposition alliance, the Pakistan Democratic Movement (PDM) and the Bhutto led Pakistan Peoples Party (PPP) have begun smelling blood. They have taken to the streets to protest against rising inflation. Protests are spreading across the country. This week will witness intensified activity of protests.

Added to these destabilizing factors is the growing internal rift between the army and the Imran Khan government. Imran may have stemmed differences by signing orders for the new DG ISI but challenging the army has ruffled feathers. The army did nothing to halt the TLP, as in earlier instances. It is watching the current government face increased internal pressures.

Pakistan is moving into a dark period of internal instability, which may not be well for the region. It may be compelled to attempt a major terrorist strike in India to divert internal minds from its predicaments. It's only saving grace is the ongoing cricket world cup, which if won, would shift anger to celebrations, though this too may be short lived.

***The author is a strategic affairs expert; views expressed are his personal