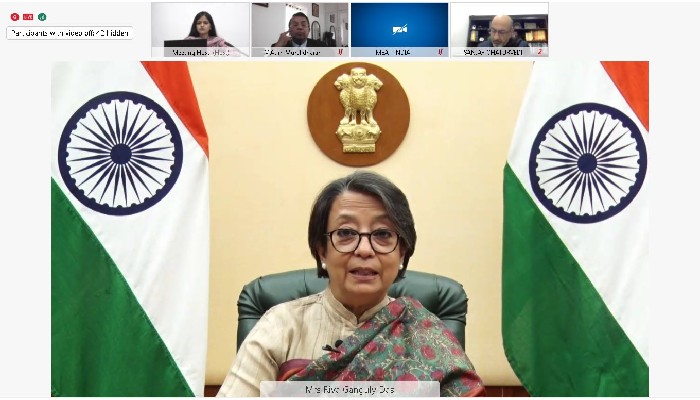 IORA being the pre-eminent regional organisation has a key role to play to foster cooperation among its members and dialogue partners, the Secretary East said

Indian Ocean Region Association needs to leverage the Indo-Pacific which is formed by the confluence of the two oceans, more proactively and synergistically towards our shared goals and in accordance with the principles of the IORA Charter, MEA’s Secretary East Riva Ganguly Das said in her valedictory address at the 8th Indian Ocean Dialogue.

She said India’s approach to the region is based on a free, open, inclusive and rules-based Indo-Pacific. “It lays emphasis on respect for sovereignty and territorial integrity of all nations in the region, peaceful resolution of disputes, avoidance of use or threat of use of force, and adherence to international laws, rules and regulations,” the Secretary East said.

The seven pillars of Indo-Pacific Oceans Initiative cooperation based on a structure light and cooperation heavy approach have great resonance with the priority areas of IORA and constitute potential areas for convergence and partnership, she added.

She, however, categorically said the IORA Vision Document currently being discussed in IORA at the Senior Officials’ level in line with the mandate of the Council of Ministers needs to be finalized at an early date.

“Its objective should be a multi-faceted engagement with all countries in the region and those with interests in it with a maritime-forward perspective and using a structure-light and cooperation-heavy framework, encompassing political, security, economic, and socio-cultural spheres, aimed at Security And Growth for All in the Region (SAGAR),”the Secretary East underlined.

She said IORA being the pre-eminent regional organisation has a key role to play to foster cooperation among its members and dialogue partners to fully leverage new and emerging technologies whilst addressing the issues of digital divide and inclusion.

“Ideas such as creation of virtual networks and digital maritime infrastructure based on Industry 4.0 standards, integration of supply chains, streamlining and enhancing of financial and investment flows, mobility of specialists and professionals inter alia should be fully explored,” Ganguly maintained.

She said this should be realized by means of the agenda and work of both the existing IORA functional bodies such as the Working Group on Science, Technology and Innovation (WGSTI), the IORA Academic Group etc. as well as new bodies, if and as required. “The new areas and paths for collaboration that have been enthusiastically discussed and identified today need to be vigorously followed up with tangible steps and concrete actions,” she added.

The Secretary East said, “The Dhaka Communique adopted by our Ministers at their 21st annual meeting held on 17 November 2021 under the able Chairship of Bangladesh, reflects the solidarity and cooperation shown by IORA Member States especially during COVID-19 pandemic, the resolve for future endeavors and brings out IORA’s forward looking agenda under the theme “Harnessing the opportunities of Indian Ocean sustainably for inclusive development” in the 25th anniversary year of the Association.”