'War was happening in our minds’: Veterans remember December 16, 1971 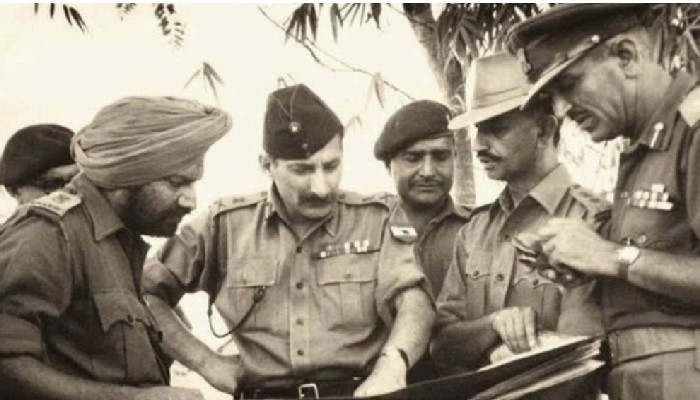 Commemorating the 50th year of India’s victory over Pakistan in 1971 war being celebrated as Vijay Diwas on Thursday, war veterans recounted their reverberating experiences, braving all odds and facing spine-chilling moments.

Commander (Retired) Ajay Kumar Ray, back then a 23-year old Flight Lieutenant deputed on Indian Naval Ship Krishna along the western Coast in Gujarat, said, “Hysteria about the war was brewing up from the entire period beginning in March when Awami League leader Sheikh Mujibur Rahman was arrested in Rawalpindi.”

“Having put in place all preparations, the Indian Army, Navy and Air Force were on alert and prepared for war with Pakistan some time after the monsoons are over in October,” he recollected.

“Only on December 3 when the Pakistan air force began bombarding some 10-12 Indian air fields in the Western Sector that the war finally begun,” he said.

“On the night of December 4-5 fierce fighting broke out and three of the Indian war ships that were on patrol along the Gujarat coast, sank 3 Pakistani warships and damaged a few other associate ships,” Commander Ray stated.

“Again on December 9-10, our ship carried out missile attacks that even damaged the Karachi oil refinery and the entire harbor city of Pakistan was engulfed in smoke in broad-daylight,” he recalled.

“On December 16 after the declaration of the complete cease-fire, the main warships came back to Mumbai while our ship came back on 20 December,” the war veteran said.

“There was no fresh water on our ship, food was scarce, we were feeding on chapattis and khichudi only and had gone without baths for days, but our morale was high for the entire six month period,” he said.

“The war was happening in our minds,” Ray remarked.

Another war veteran, Wing Commander Anandmoy Bagchi stationed in the Pathankot Air Force station as a technical support engineer looking after radio communications described his experience of the period from December 3-16 to be ‘spine chilling’.

“There was high-alert in anticipation of the war for months and we were nearly fatigued of the preparations. But only on December 3 did the attacks on the airbases begun and we were relieved that the war had finally started,” he said.

“Every time there was a sortie attack by Pakistan, me and my colleagues would take shelter in the bunkers and on days when there were many attacks, we ran out of time to even take cover. It was spine-chilling,” Wing Commander Bagchi reminiscenced.

Former Chief of Army Staff, Gen (Retired) Shankar Roy Chowdhury who was then a Major in the Indian Army, had earlier told us about his experience of working inside the Mukti Bahini that was set up by India.

Describing the situation at that time as extremely complex and confused, General Roy Chowdhury said the Mukti Bahini and the Indian Army were both parts of the same force.

“We had orders to keep harassing the Pakistani Army and cause maximum casualty, the morale break-down which is the essence of the guerrilla warfare. It is a hard job to stir up a hornet’s nest in the country. The people of Bangladesh were very much in favour of us. So, it was the classic case of a people’s war in a peoples setting,” he said.

“As long as we were in the Mukti Bahini, it was mandatory for us to move in plain clothes, because then war had not been declared. Once, the war was declared, we dug out our uniforms and got back into them. Had we moved into uniforms, we could have become marked targets for Razakars,” General Roy Chowdhury recalled.

On December 16 when the ceasefire was declared, he was in Jessore with his associates from Mukti Bahini.

“On December 16, there was a huge parade in Dhaka after the Indian Army moved there. We were working with the Mukti Bahini and I was sitting under a tree somewhere on the suburbs of Jessore with my associates from the Mukti Bahini,” the Retired Army Chief said.

“I was in plain clothes. I had tuned in to the radio, which was not working properly, but we had trained our ears to our brethren in the Indian Army and their good campaign, especially the Indian Army’s 16th Parachute Brigade that had played an important role in campaign,” he added.