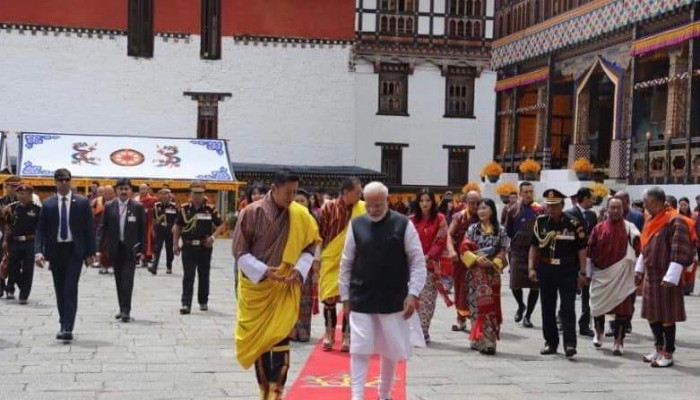 Prime Minister Narendra Modi on Friday was named for the highest civilian award of Bhutan, Order of the Druk Gyalpo for extending his unconditional friendship and support extended to the Himalayan nation over the years and particularly during the pandemic.

Prime Minister of Bhutan Dr. Lotay Tshering on twitter expressed happiness at the conferring of the nation’s highest civilian award on PM Modi.

“Overjoyed to hear His Majesty pronounce Your Excellency Modi ji’s Narendra Modi name for the highest civilian decoration, Order of the Druk Gyalpo,” he said the twitter post.

Bhutanese Prime Minister said Indian Prime Minister Modi’s unconditional friendship and support extended to the Himalayan nation over the years and particularly during the pandemic was highlighted by the king and added that it is well-deserved.

“HM highlighted all the unconditional friendship and support Modi ji extended over the years and particularly during pandemic,” the PM of Bhutan’s post added.

“Much deserving! Congratulations from the people of Bhutan. In all, interactions, seen Your Excellency as a great, spiritual human being. Looking forward to celebrating the honour in person,” it further said.

Mutually beneficial economic inter-linkages between India and Bhutan have been an important element in bilateral relations.

The Golden Jubilee of the establishment of formal diplomatic relations between India and Bhutan was celebrated in the year 2018.

India continues to be the largest trade and development partner of Bhutan and has extended its assistance to several developmental projects in the country – such as the 1020 MW Tala Hydroelectric Project, Paro Airport, and the Bhutan Broadcasting Station, the MEA recounted.

The special relationship has been sustained by a tradition of regular high level visits and dialogues between the two countries.

Modi as the Prime Minister had visited Bhutan twice in 2014 and 2019. During his last visit to the Himalayan nation of Bhutan, PM Modi had sought to diversify partnership with the kingdom from the hydro-power sector and to enhance trade and linkages in space and education

Later, India sent an extra 400,000 doses of the Covid-19 vaccine to the Himalayan country, allowing for a national vaccination against the epidemic.

Lotay Tshering, Bhutan's Prime Minister expressed his gratitude by praying that these acts of kindness develop into endless blessings for the people of India.