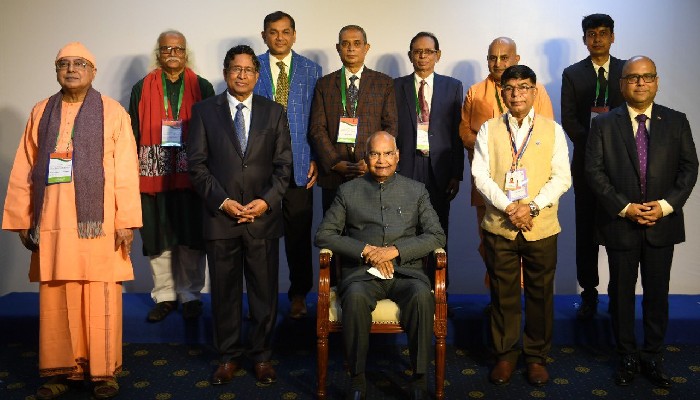 “Bangladesh has a special place in the hearts of Indians and ours is a uniquely close relationship based on age-old ties of kinship, shared language and culture,” President Kovind said

President Ram Nath Kovind on concluding day of his three-day visit to Dhaka on Friday said India is committed to assisting Bangladesh in its journey towards a strong economy, partnering with it as it proceeds to greater possibility.

Addressing the reception for Indian community and Friends of India in Dhaka, President Kovind said, “As a country that also shares land borders with Bhutan and Nepal, India is conscious of the fact that a well-connected and better integrated sub region is important for achieving a better standard of living for our people, and meeting their growth and developmental aspirations,” he stated.

“In this spirit, India remains committed to assisting Bangladesh in its journey towards a strong economy, partnering with you as you proceed to greater prosperity,” the President noted.

Further noting that Bangladesh has a special place in the hearts of Indians, he said, ours is a uniquely close relationship based on age-old ties of kinship, shared language and culture.

“Our ties have been nurtured by the sagacious leadership of the two countries,” the President informed.

“While paying homage to Bangabandhu at his home in 32 Dhanmondi, I was reminded of the declaration of independence that Bangabandhu had issued in Dhaka on 26 March 1971, the atrocities and genocide faced by the people of Bangladesh and the armed struggle of the Mukti Bahini against the brutal Pakistani occupation forces,” the President stated.

“Today, as your country becomes a model of growth and development in the region, it has proven to the world that the fight of the people of Bangladesh was for a just cause,” he noted.

“This fight was for fundamental democratic rights and that the emergence of Bangladesh was indeed the power of right defeating the power of might,” Kovind added.

Noting that India has also witnessed commendable growth, he said the economic and social linkages that have been forged between the people of our two nations have also contributed to this shared story of growth and development.

“I am glad that the leadership in both countries is cognizant that our growth trajectories are interlinked and that sharing of resources and experiences is the mantra for sustainable development,” President Kovind reckoned.

“The two Governments have also ensured that the fundamentals of our economies remain strong and robust. I am glad to note that our two sides have also made strong commitments to make our growth inclusive, sustainable and environment-friendly,” he informed.

“I see huge potential in strengthening the cooperation further in the areas of green energy and clean technology,” Kovind stated.

President Kovind told the Indian citizens living in Bangladesh, “You all have made a mark in various sectors of importance in Bangladesh. While you have contributed to the economic and social development of Bangladesh, you have also cemented our long-standing, close bilateral relations.”

“You are making India proud by bringing prosperity to our region. While doing so, you have also followed the values and traditions of our country, which are also part of our shared heritage with Bangladesh,” he added.

“Maintaining Bangladesh’s foundational values of a progressive, inclusive, democratic and harmonious society has been one of the major contributions of Prime Minister Sheikh Hasina,” the Indian President stated.

“India will stand in support of a Bangladesh that embodies the values that emerge from the liberation movement of this country,” he further said.