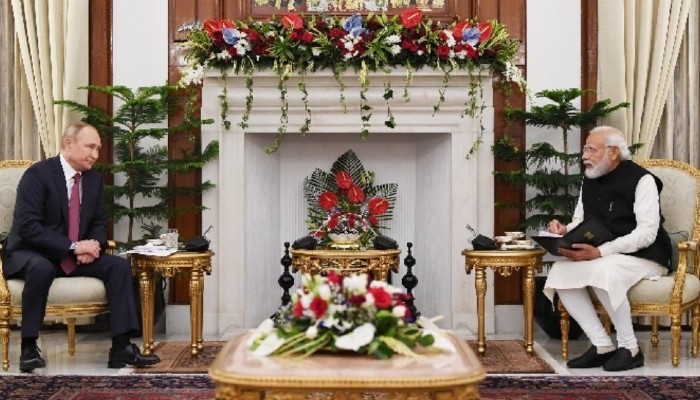 Prime Minister Narendra Modi had a telephonic conversation with Russian President Vladimir Putin on Monday to follow up on their discussions during the Russian leader's recent visit to India.

They agreed on the way forward for enhancing India-Russia cooperation and discussed recent international developments.

"Spoke with my friend, President Putin, to follow up on our discussions during his recent visit to India. We agreed on the way forward for enhancing India-Russia cooperation, including in supply of fertilizers. We also discussed recent international developments," PM Modi said on Twitter.

Prime Minister Modi and President Putin had held the 21st India-Russia Annual Summit in New Delhi on December 6 and discussed the entire gamut of bilateral relations.

The two leaders had expressed satisfaction at the sustained progress in the ‘Special and Privileged Strategic Partnership’ between both countries despite the challenges posed by the Covid pandemic.

They had also welcomed the holding of the first meeting of the 2+2 Dialogue of Foreign and Defence Ministers and the meeting of the Inter-Governmental Commission on Military & Military-Technical Cooperation in New Delhi on December 6.

According to a statement issued by the Ministry of External Affairs after the Summit, the leaders underscored the need for greater economic cooperation and in this context, emphasized on new drivers of growth for long term predictable and sustained economic cooperation.

They also appreciated the success story of mutual investments and looked forward to greater investments in each other’s countries.