In south Kashmir, bumper apple harvest brings back the smiles for farmers 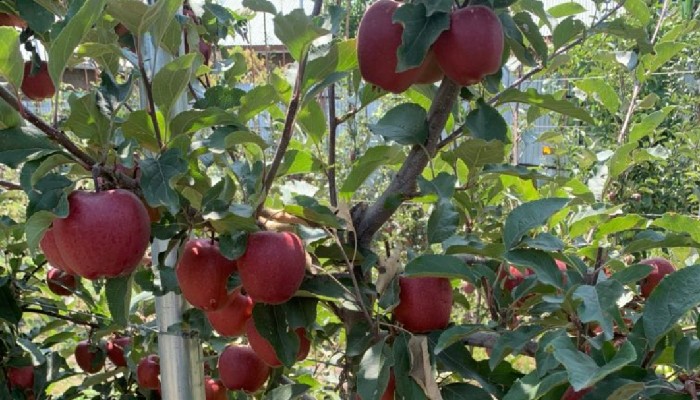 A fresh wave of happiness has swept through the Shopian district of South Kashmir with the huge yield of apple produce this year.

Farmers said that they suffered big losses last year due to low yield and poor quality of the crop owing to different reasons like hailstorm, excessive snowfall, lockdown and supply of spurious pesticides.

According to Mohammad Shoeb, due to scab, he lost 80 percent of his produce last year.

"I am extremely happy with the yield as the quality is top grade and production is good this year," he noted.

"We had lost almost 85 percent of our crops due to the diseases which hit our apples in 2020. We were very apprehensive about the production this year but thankfully the scene is completely different," he pointed out.

The apple growers maintained that this year, 90 percent of the crops are of good quality with no sort of disease.

One of them, Abdul Ahad, maintained that the government kept a check on the market to stop the sale of spurious pesticides.

The government introduced farmers to the concept of high-density apples in 2019. This brought about a tremendous change on the fruit bearing front for farmers this year.

"This year, the trees start bearing the fruits. It happened at a time when farmers were grappling with issues like fruit diseases, lockdown and unprecedented snowfall," said Rayees Ahmad, a young entrepreneur.

In 2019, the horticulture department said that there was a need for the propagation of nurseries of high density plants that would develop in future where in at least 5,000 root stocks were distributed to the private growers against the cost.

Availing this opportunity, Rayees got into high density apple farming and now he is reaping the benefits.

"Where a normal tree would take at least 10-15 years to grow and bear fruits, the high density variety gives fruit in less time, maximum after three years," he pointed out.

"High density needs less pesticides and is beneficial in all respects for a farmer. Fruit is good quality, investment isn't much and returns are the best," he explained.

Rayees left his lucrative job to plunge into entrepreneurship after learning about this government initiative.

"With the dividends I got, I believe it's at par with any top rank job. With this, you don't have to wait for years for your crop... within three years, you are good to sell your crop in the market. The quality is so good that people come to you running for purchase and you don't need to go anywhere," says a happy Rayees.

Mohammad Younis, an Extension Officer, said that with high density apples, there is a complete transformation in the market of apple production. Not only is this proving beneficial to the apple growers, but it's anticipated to give a boost to the apple industry in Kashmir thereby uplifting the economy, he said.

Apart from this, the government is devising schemes to reach out to people for taking up high density apple production as a career option.

Recently, the administration informed fruit growers that special crates have been procured by the department for improved logistics of fruits, which would also greatly reduce losses previously incurred due to transportation and handling. The Principal Secretary informed that large number high density plants have been arranged for by the department to give a boost to horticulture in the region.

The Administrative Council under the chairmanship of Lieutenant Governor Manoj Sinha also approved the implementation of high-density plantation scheme in the horticulture sector with the support of the National Agricultural Cooperative Marketing Federation of India Ltd (NAFED).

"The new high-density plantation scheme has provisions to provide 50% subsidy to orchardists for the establishment of high-density orchards accompanied by a loan facility for raising 40% of remaining capital. The scheme will also provide subsidies to the growers on account of expenditure related to micro-irrigation, plant material, and anti-hail nets. Under the scheme, preference will be given to farmers with landholdings of less than 4 kanal," a government statement said.

Government statistics show that
Kashmir exports around 20 lakh metric tons of apple every year. The horticulture industry is considered to be worth around Rs 8000-9000 crore, including the employment it generates. Kashmir accounts for 75% of the total apple production in the country.

The government is focusing on giving a boost to the income of farmers through which horticulture sector is also reaping benefits.

Apart from this, the government also established two new pesticides laboratories at Baramulla and Kulgam and one soil testing laboratory at Pulwama districts.

According to a report from the horticulture department, horticulture is able to generate approximately Rs 10,000 crore annually, which contributes to 8 percent to the Gross State Domestic Product.

Bhat also said that In India, total apple production is approximately about 28 lakh MTs; of this, 20 lakh MTs are produced from J&K which makes it Rs 8,000 cr worth market of apples.

In a first, national flag unfurled at 'Ghanta Ghar' in Srinagar

To be fair, the KPC story is getting murkier day by day because a single narrative is repeatedly being presented before the media in the world

LoC peaceful but over 100 militants waiting to infiltrate into Kashmir: BSF