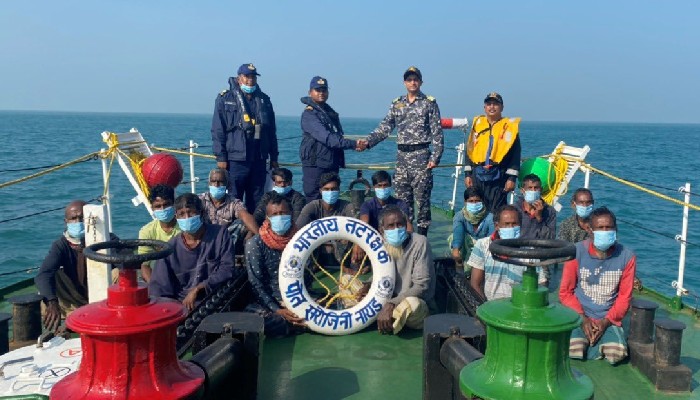 The boat along with 20 fishermen was formally handed over by ICGS Sarojini Naidu to Bangladesh Coast Guard Ship Shadhin Bangla at IMBL, said a statement of the Ministry of Defence.

The Indian fishermen displaying humanity provided necessary assistance to the boat and towed the distressed boat to Paradip on December 26 last year, the statement said.

The incident highlights the importance given by Indian fishermen to help mariners/ fishermen at sea in distress irrespective of nationality thereby forming an important link in ensuring safety of life at sea, it noted.

Indian Coast Guard in coordination with Marine Police at Paradip provided shelter to the boat and its crew on humanitarian grounds, the statement mentioned. The crew were reported to be safe and healthy, it recalled.

According to the statement, the Indian Coast Guard not only provided solace to fishermen and mariners in distress, but also provided humanitarian assistance.

Such operations highlight the coordinated response between Coast Guard agencies of India and Bangladesh demonstrating mutual commitment for safety of fishermen at sea and further strengthening the bilateral relationship between the two countries, it reiterated.