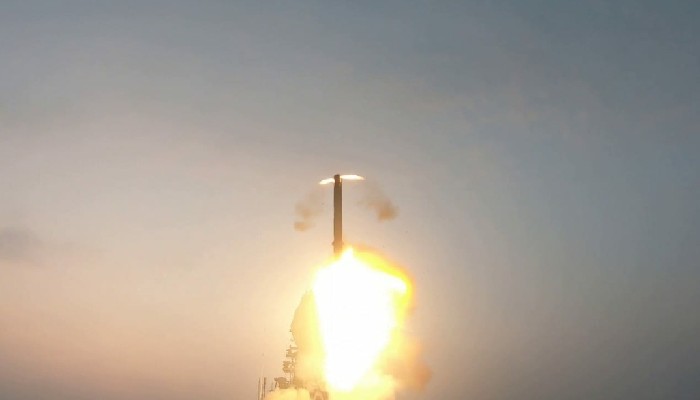 The test was carried out from INS Visakhapatnam.

The missile has proved its mettle on land, sea and air

The advanced sea-to-sea variant of the BrahMos Supersonic Cruise missile was successfully tested from an Indian Navy destroyer on Tuesday.

The missile hit the designated target ship precisely, the Defence Research and Development Organisation (DRDO) said in a tweet.

The test was carried out from INS Visakhapatnam off the western coast.

It was test fired from a Sukhoi 30 MK-I aircraft at the Integrated Test Range, Chandipur off the coast of Odisha.

The multi-role and multi-platform supersonic missile system has proved its worth on land and sea as well as air. Different versions of the missile system have been deployed in all three services - Indian Army, Indian Air Force and Indian Navy.

BrahMos, which derives it name from the Brahmaputra and Moskva rivers, is a joint venture between India's DRDO and Russia's NPOM to develop next-generation supersonic missiles for the Indian Armed forces.

Inaugurating the BrahMos Manufacturing Centre in Lucknow, Uttar Pradesh, on December 26, Defence Minister Rajnath Singh had said that the missile had strengthened India's credible deterrence in the 21st century.

He had described it as the world's best and fastest precision-guided weapon.